Time To Stand Up For Israel

In the early morning of November 18th 2014 a terror attack occurred two Palestinian men from Jerusalem entered Kehilat Bnei Torah synagogue, in the Har Nof neighborhood of Jerusalem, Israel, and attacked the praying congregants with axes, knives, and a gun. The result was 4 rabbi’s and a responding Druze police officer were killed in this awful terror attack.

That same morning I was at work, it was not very busy and I looked into Facebook were I, immediately saw the awful news. It touched my heart like always. At the end of the day at home, I talked to a dear Israeli friend, he asked me what is in the news about this terror attack. I told him I will take a look, opened the online newspaper and saw…NOTHING…nothing in the headlines…nothing in the old news, just nothing… When I looked closer I discovered an article with a picture of crying arab women and children, written above it in captives “ Israeli’s brutally demolished houses of Palestinian people” further in the article you could read it were houses from so called “terrorists”. I exploded from anger, after the horrible (social) media biast against Israel during Operation Protective Edge, this was too much for me. I took an Israeli flag from internet, wrote on it Enough is Enough, stop the media terror, we stand with Israel and posted it on Facebook, within one hour the picture was shared 160 times, It seemed I was not the only one that was bothered by this horrible anti-Israel communication… 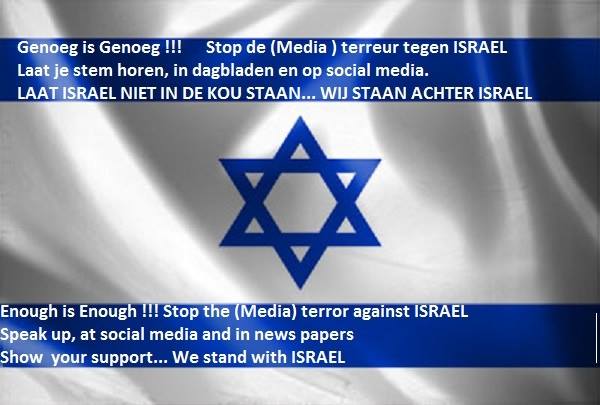 The same night Brenda called me, told me she felt the same way and we decided quickly to start a Facebook group “Time To Stand Up For Israel” aka TTSUFI. The start of a very active Pro israel era, which asked very much energy, time, money and committment. 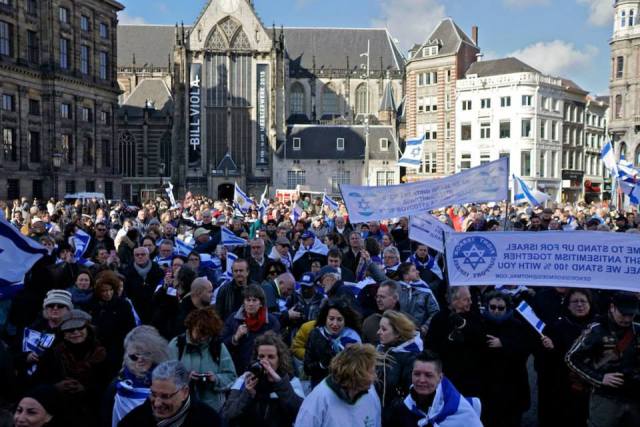 We wanted to be a different group than others not only postings on Facebook but being really active. So organize rallies, support actions, Israel markets, etc etc. Especially the first 2 weeks of our existence we got messages from very emotional Jewish/Israeli people. Sometimes till the early morning we were chatting and listening to the stories of people that were happy they could tell their stories. This first 2 weeks we got extremely little sleep but we did it with pleasure, relieved we could finally make a difference. Our group filled the gap between the official Israeli , more or less political affiliated organizations and the very Christian organizations that stood up for Israel. In the middle there was nothing. We formed a mixed group of Dutch people, Israeli’s and other nationalities. Jews, Christians, secular ( both Brenda and me are secular) and so on. We are not a political affiliated group, although as persons you could say we are more affiliated with the rightwing.  We decided this group should illustrate the positive side of Israel.

We started to organize a big Pro Israel rally on January 11th 2015, it was a lot of work but we were enthusiastic and happy to be active for Israel. Unfortunately in the week before the rally the horrible terror attacks in Paris ( Charlie Hebdo and the Kosher supermarket ) took place. After a lot of talks and advice from the Jewish community in Holland we decided for our own safety to postpone the rally to march 1st 2015. The rally itself was unforgettable the start of a lot of positive actions. We did lobby for the city bond between Tel Aviv and Amsterdam, 5x we were present there, actions against labeling in dutch parliament and in front of the Europeen parliament building in The Hague, Holland. We went to a lot of events of BDS and anti-Semitic persons to learn and listen to their intentions.

We organized Israel markets with Nati Rom and Jeremy Gimpel . We wrote letters to parliaments, some were used in a debat. We organized the “Welcome Netanyahu rally” on september 6th 2016,  We wrote letters to supermarkets, municipalities in order to try to change their anti-Israel attitude or decisions. Two time we were present at the Kristallnacht commemoration. In 2015 Haneen Zoabi disgraced the monument with her presence and her words full of hate. In 2016 we wanted to organize it ourselves, but the mayor of Amsterdam Eberhardt van der Laan forbid us to be at the monument in a meeting on November 4th 2016, 5 days before the commemoration should start. 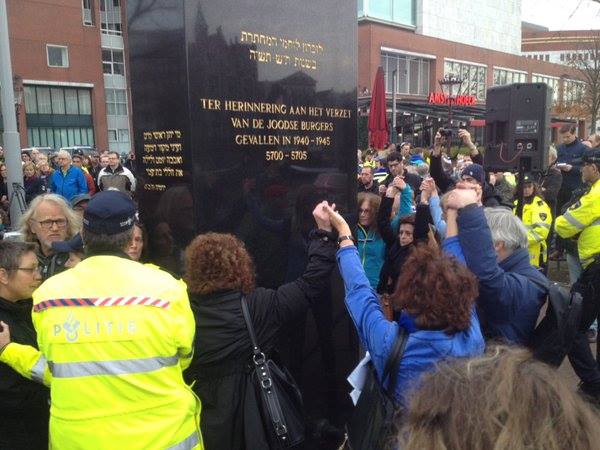 Since March 2016 we are nearly every weekend present on Damsquare, to support Israeli tourists and Jewish tourists, to show them that not everybody in the Netherlands is anti-semitic and teach the ignorant visitor the good side of Israel. It gives a lot of positivity, we experience amazing things, talk to people all over the world very very useful.

Unfortunately the amount of threads, hate, anti-semitism and violence is increasing. These 2,5 years brought us a lot of good things, a lot of energy but also a tremendous lot of tears and sadness.   The bigger TTSUFI got, the more people wanted to get involved, demanded their own share. Suddenly they had an opinion and a few even didn’t accepted our leadership. But we stand strong and proud. It always is difficult to please everyone, it is not only difficult but impossible… Time To Stand Up For Israel is a valuable group of people, that is still growing and will be more known in Israel and in Holland. 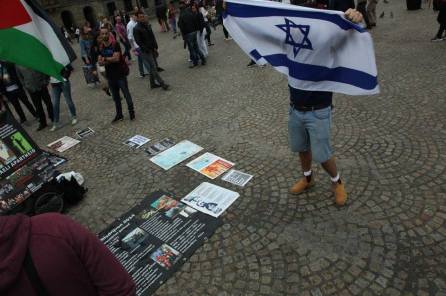 To be the co-founder of such a group makes life not easy, people stay people, where people are there is conflict, jealousy and bad intentions. But through this group we also got amazing contacts, a lot of new exciting experiences, a lot of gratitude, we learn each day, we make mistakes, we have success and to be honest it is a bit addictive.   Israel is in our heart and soul and it is in our  blood to keep standing up for Israel.

1 Response to Time To Stand Up For Israel