What makes Israel special? So many different people ask this question to me so many times.
It is not easy to answer because it is a feeling that captures my heart the moment I enter Israeli soil; the moment I take the first breath of air something is happening inside me what I almost can’t describe.

I will try however to give an answer. When you look to the history of the Jewish people, you see a history of pogroms, hatred of Jews, fear, expulsion, exclusion, discrimination and wonders of victories against all odds.  You see the devastation and disaster the Jews had to undergo during the Second World War and you almost feel the sadness of the loss of so many relatives simply because they had the “sin” to be Jewish

When you walk in Israel, you see in how little time (70 years) this country that was for 80% desert became a modern state with ultra-modern metropoles, known about her many valuable contributions to the world, in medicine, in High-tech, in security and defense.. But what you feel most is the pride and courage the most Israeli people have.
With one sentence in their head and heart “never again”… we will fight for what is right.. We will stand up for Israel no matter what…

How I love this attitude. How much it makes me feel home there in this tiny little state surrounded by so many vile enemies.

Back in Holland, back in Europe… you see the society is changing more and more; the Christian / Jewish culture is integrated, slowly and surely into the new culture that the new immigrants from the Arab Muslim countries are bringing. These immigrants come from countries that are the sworn enemies of Israel, it is not strange that the antisemitism is rising sky-high again. This situation is seen on the streets in Holland, in Amsterdam. Hamas supporters and members of the BDS movement ( Boycott, Divestment and sanctions) are spreading their anti israel propaganda en false content into the streets of Amsterdam.

Strange to notice that the most Dutch people keep silent, they look away untill the moment antisemitism is hitting the doormat, suddenly the whole area is panicking, calling up for actions but above all bewildering. How is it possible that this antisemitism is in my street?  People are left astonished. Like they never saw something like this. Antisemitism? Here? In my street?  Somehow it is great that people are astonished. It is clear that they live their lives calmly and as long as they do not interfere too much with the real problems in the world, everything will be fine.
But just like the 30th of the last century, evil comes nearer. And if one does not intervene now, if one does not rise against the evil (in the form of Israelhate and Jew-hatred) then it is too late. Every person who does not conform to the new culture will die irrevocably. Then “Never Again” changes in “ How could this happen now??”.

Let us take the bravery of the Israeli’s as an example, let us,  together , ensure that Israel can remain the safe haven for all Jews and serve as an example to the world.

Be brave and pride.. 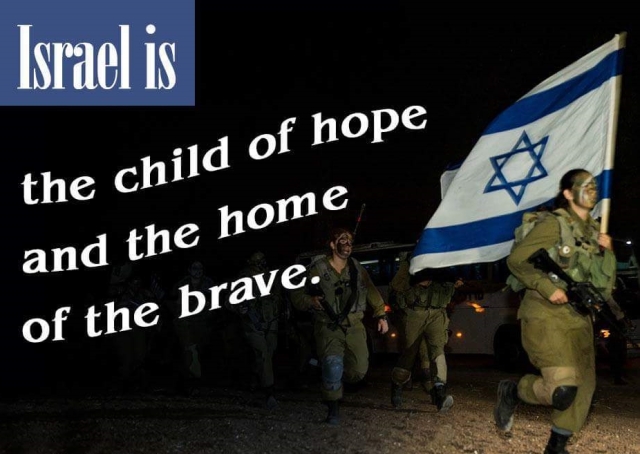