A few month ago, we saw the organization EAJG ( A different Jewish voice) planned an event in “De Nieuwe Liefde”, a location known to host extreme anti-Israel events.   The”Nieuwe Liefde” introduced the event with the title; Israel-Palestine debate 2018, The Palestinian right of return. Why, how and who?

Ali Abunimah is a Palestinian-American journalist and the co-founder and executive director of the widely acclaimed publication The Electronic Intifada and Eitan Bronstein Aparicio is a an Israeli educator , he founded the NGO Zochrot and served as its Director until 2011. In 2015 he co-founded De-Colonizer

Only reading the title of the event made me sick, so, as Founder of Time To Stand Up For Israel we didn’t have any other choice then to make an event and go and listen to their lies. Investigating the opponents and looking where they believe in .

As the event was introduced as a debate, we figured we could come and give our Pro-Israel opinion. Wrong, as soon our event was discovered on the internet, our opponents told, they would inform de location ( de Nieuwe Liefde) , so they could refuse us. Probably afraid we would disturb their indoctrination lecture.

Time for a second plan. I bought a wig and we decided to drive to Amsterdam and enter undercover the location. In the car we had a lot of fun, it was hilarious to see me wear the cheap wig and we couldn’t stop laughing. Near the location the situation became tense, we decided to walk as individual visitor to the location, the chance they would discover and recognize us was much bigger in a group. While I walked to the location, I saw the director of this, at least, disputable place outside checking all the visitors, My heart was pounding in my chest. He looked at me, but I turned my face the other way. Yes, I made it to the entrance and i passed the selection.

But my heart stopt, inside at the counter, two people. One woman that was 2 weeks prior on Damsquare, we had a huge discussion with her, were we told her she behaved as a neo-nazi and on the right professional activist José van Leeuwen, that would recognize me between a million people and she looked behind me, where the third person popped up.. Maarten Jan Hijmans, a self-appointed journalist/writer, writing under the name abu Pessoptimist.

The last two kicked a friend and me, within 30 seconds out of a location where we wanted to attend an event about the Gaza flotilla. I decided to act “normal” and with big relieve I noticed they didn’t recognize me. I was in..

Time for the ”debate” . First was Ali Abunimah, an American Arab, stating he is a Palestinian, pitty enough he could speak very well. And if you didn’t know better you would believe his lies. He told about “Palestine” before the Jews Came, the destruction of land by the Jews, The genocide and the Naqba. To hear the lies was one big horror.   He did nothing else then compare the “Israeli regime” with the South African Apartheids regime. Totally disgusting and not to compare at all, but well, what can we expect from an Arab that grew up in Islam that is known for it’s Jew hatred?

The Time went slowly. After a 40 minutes or so, that felt as 40 years, it was time for Eitan Bronstein. Shocking and disgusting to see an Israeli self hating Jew talk about Israel like this, well he did not even talked about Israel, he talked about Palestine. His English was bad and he had nothing much to add to Ali Abunimah. Still for us this was the most sad. So many People would love to live in Israel and this traitor of his country is damaging Israel so much. He is so naïve, telling there is room enough for a few million extra Arab “refugees” and they would live in peace next to the Jews… No one talked about the Jew Hatred in the Islam, Nobody talked about Islamic ideology and this Eitan, that should be proud of Israel betrayed her with his words. be joint sickening. 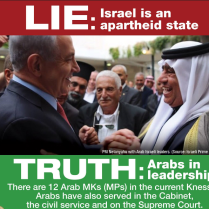 In this ‘debate’ that wasn’t a debate but an indoctrination session with creepy people in the room, (when you closed your eyes, you can easily imagine that you are in a room full of SS officers applauding their leader), we did hear thousands of times the word South Africa. Totally misplaced. But the most painful was the Jews inside the room, cheering and supporting the BDS (boycott, disinvestment and sanctions against Israel) movement. Somehow I think that if Islam will definitely be settled in Europe and the sharia law will be introduced, these group with traitors will be the first to knock on the door to Israel. Painful, it was a painful evening , where to be honest, I lost again hope that people at the end will see the truth about beautiful Israel.